I find it difficult to put into words my recent voyage to Antarctica, which literally is the “End of the World.” It was the last continent to be explored and still holds great interest to the scientific community. James Cook is credited with discovering the existence of Antarctica although the first landing was a century later. To this day, only a small number of people have ever stepped foot on the continent.

We set out from San Antonio, Chile a Pacific Ocean port not far from Santiago and 22 days and 6,600 miles later we ended up in Buenos Aires. The trip took us around the Cape Horn, Strait of Magellan, and Drake Passage, a track of rough waters that was a common route for ship traffic before the completion of the Panama Canal . Our voyage took us through Patagonia, Antarctica and the Falklands, each unique and breath-taking.

Our first week took us through Patagonia, the southern portion of South America, consisting of isolated towns and villages, the Andes Mountains, cloud covered volcanoes, pristine lakes, fjords and glaciers. We didn’t get to the eastern portion of Patagonia which is a desert created by the Andes that trap the moist air blowing from the west. We made several stops along the way to view the lush wilderness running alongside the Andes. There are no roadways from the north that you can take to Patagonia. The only way to get there is by boat, which explains why the communities are so isolated. The only industries that exist are sheep farming, tourism and hydro-electricity generation. 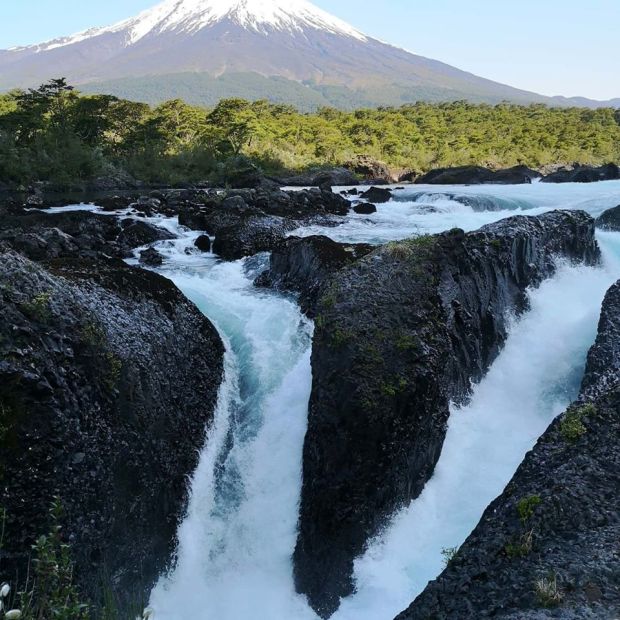 On the morning we arrived at the Beagle Channel, a strait that runs through the Tierra del Fuego Archipelago, we were treated to a magnificent show. On top of the Andes were ancient glaciers that run down the Chilean fjords into the channel. The region is called Glacier Alley and for the ship to cruise through the channel, it must bring on board a Chilean pilot. We ordered coffee in our room and stood on our balcony as we passed one glacier after another. The weather was cold, cloudy and rainy – a typical summer day at the End of the Earth. The most unique glacier was the Romance Glacier that covers the top of a mountain.  Exposed rock extends below the glacier and a series of twisting waterfalls cascades from the glacier over the rocks and down to the sea.  We were close enough to see the flow of water.  It’s amazing that there’s any glacier left at all after you see how much water it releases every second.

Our cruise through Tierra del Fuego ended at Ushuaia, Argentina, the southern most city in the world. It is a bleak outpost where it almost always rains and the wind constantly howls. From Ushuaia, we set off for Antarctica. 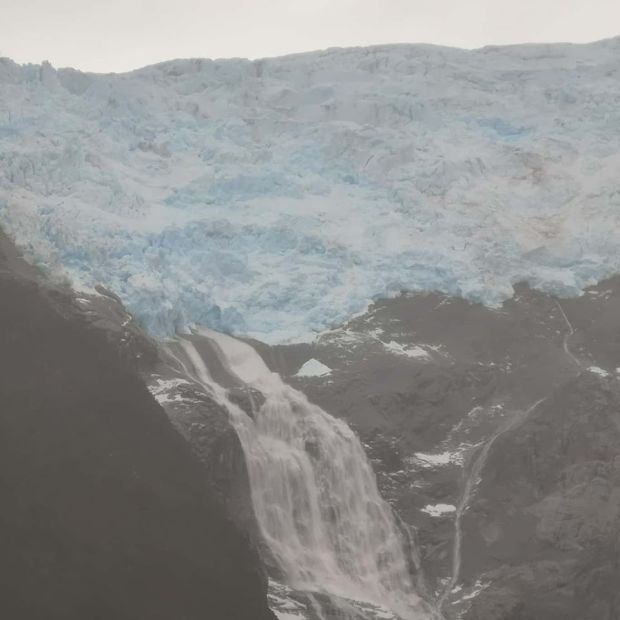 Antarctica is a large continent that exceeds Australia and Europe in size.  Since it is locked in by sheets of ice, getting to the mainland requires a ship that can maneuver through the ice, even during the summer. That’s not possible for a large cruise ship. Our Antarctica experience was limited to traveling around the Antarctica Peninsula which stretches about 1,000 miles from the mainland. The farthest south we cruised was to the 63rd latitude which is probably at least 2,500 miles from the South Pole.

So what was it like? It was summer and north of the mainland so the ocean was not frozen solid but there were many icebergs floating by. The ship had to be careful throughout this part of the trip and there were times when our passage was blocked by ice and we were forced to turn around. Some of the shores was free of ice and snow revealing black volcanic rock. Remnants of volcanoes were frequently seen rising from the ocean covered in ice. At times we had brilliant blue skies and then suddenly clouds and fog would roll in and we had to move on. You don’t want to be cruising through icebergs with no visibility. It rarely snows on Antarctica although it’s always snow covered. High winds blow around the existing snow. In fact, it’s almost desert like conditions only colder. I found it extremely dry and found I had to use chapstick and lotion to moisturize. I had difficulty sleeping because of the dryness. The temperatures were one or two degrees above freezing each day and did not dip much lower over night. That’s because it was only dark from 11 pm to about 4 am.

Although we couldn’t land, we saw plenty of wide life as we floated around numerous bays and channels. The water is feeding grounds for much of the wildlife with an abundance of krill which are food for whales, seals and penguins. The waters were pristine as the waters are protected by a multinational treaty and are relatively pollution free. However, no part of the globe is more impacted by global warming than Antarctica. The ice is melting rapidly. Some mornings we would wake up to watch whales playing literally under our balcony. They had this interesting routine of swimming around in a circle in groups of two or three to confuse and trap krill with bubbles before moving in to scoop them in their mouths. We had seals and penguins lying out on ice flows trying to stay cool in the “warm” temperatures. On one sheet of ice, we saw a mother seal who had just given birth with the baby lying next to her. Frequently large groups of penguins would be seen swimming alongside the ship jumping in and out of the water like porpoises.  Everything we saw was explained and supplemented by three scientists on board our ship. They provided lectures and described the scenery around us over the public address system from the bridge of the ship. I could not possibly imagine what the early explorers endured and of course many died on the continent. Nor can I imagine what motivates the strange group of people working in the research centres on the continent. They are unique breed of people.

Our last day in Antarctica waters ended abruptly. It was a gorgeous morning and we were in Hope Bay when the weather suddenly changed and fog rolled in. We had to quickly sail out of there and headed north with our fog horn blasting every five minutes. We continued north for another day until we reached the Falkland Islands, an archipelago about 300 miles off the coast of Argentina. When we arrived, I found it to be a bleak rocky set of islands.  It’s hard to believe that two countries fought a 42-day war over this place. We docked at the capital, Stanley, a community of about 2,000. I was surprised to learn that the Falklands rank fifth in the world in GDP per capita. The main industries are fishing and raising sheep. About 25% of the population work for the government. Our tour guide were civil servants who did tours on weekends and holidays. Tourism has been growing because of interest in the Antarctica. The main reason to visit the Falklands is penguins. There are penguin colonies scattered around the island where you can literally walk within ten feet of the birds. We visited a penguin rookery at Bluff Cove. The more curious birds will even approach you. We had the opportunity to see three breeds of penguins – King, Gentoo and Magellenic.

After 22 days of cruising we eventually reached out final destination, Buenos Aires. A beautiful city with stunning architecture, wide boulevards and beautiful parks dotted with sculptures. An incredible contrast to the wilderness we witness in the preceding weeks. I truly believe this trip will never be matched. I doubt I will ever have an opportunity to return but I would certainly love to. The “End of the World” is an accurate description for Antarctica. But there are no words to describe how beautiful and vast this region of the planet is.

4 thoughts on “My Trip To The End Of The World”